Are you searching for self-catered Serviced Apartments with Kitchen in Kolkata? Look no further as Olive Service Apartments Kolkata offer our collection of Service Apartments in Salt Lake City & New Town Rajarhat that are available for flexible Weekly/Monthly Rentals!

So if you are looking for a break from the expensive Business Hotels of Kolkata and cramped/shared guest houses, Olive Service Apartments Kolkata can be your new home in the City of Joy. We are perfect for Corporate Housing Guest Houses for Executives, Vacation Rentals Holiday Homes for Tourists as well as Medical Tourism to Kolkata.

With customized designs, our private homes are furnished fully and come with separate kitchen. All amenities like Tata Sky, Wifi Internet & Cleaning services are included.

We have a trained team available to answer all your queries in both pre/post booking stage. They are available on-call and during your stay to address any of your issues.

For Weekend Packages & Special Long-Stay Offers on rental Serviced Apartments in Kolkata, please CALL us at +917290027000 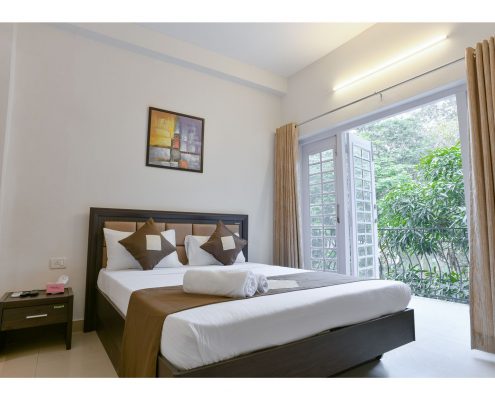 * Deluxe Rooms
We offer budget rooms of 230 sq ft along with king-sized beds & attached bathrooms. They include facilities like flat screen TV with Tata Sky HD under the Bed & Breakfast plan. You will also be offered access to a shared kitchen. If you are looking for short-stay, comfortable yet economical staying facilities, then these would be the perfect option for you.

* Studio Apartments
Our Studios have been designed for a couple or single executives who desire more space along with basic cooking facility. These customized Studios offer an area of 400 sq ft which comes with Couch seating and Kitchenette. It includes Induction Cooktop, Microwave, Toaster, Refrigerator and basic Crockery. The Studio also has Queen bed and attached bathroom besides a flat-screen TV with Tata Sky.

* One Bedroom Apartments
Our most popular and top-selling apartments are the perfect accommodation for Single Executives & Couples looking for extended stays. These apartments are spread over an area of 600 sq ft along with a King/Queen sized bed and an attached bathroom. They also consist of a separate living room along with a sofa and dining table. There will also be a fully equipped kitchen wit all cookware.

* Two Bedroom Apartments
The Two Bedroom apartments are designed to accommodate traveling groups and small families. They are spread over an area of 950 sq ft and consist of 2 separate bedrooms with King/Queen sized bed. A living room with a couch and a dining table with balcony. There is a fully equipped kitchen with Stovetop, microwave, toaster and other utilities.

* Three Bedroom Apartments
These apartments have been setup for families and friends who are traveling in groups and also to accommodate corporate guests. They are spread over an area of 1800 sq ft with 3 separate bedrooms along with Twin/King/Queen sized beds. All of them have 3 separate bathrooms along with a living room. They also have a spate dining area and a balcony. The kitchen is fully equipped with all the accessories like Gas, Refrigerator, Toaster, Microwave, and others.

We are the top-rated Serviced Apartments & Vacation Rentals Holiday Homes in Kolkata with Kitchens. Olive Service Apartments Kolkata are self-catered & non-sharing accommodations in Salt Lake City & New Town Rajarhat. They come with spacious living rooms along with separate Kitchens to offer our guests more space with complete privacy & comfort. We are confident that it’s unmatched by any similar accommodation in the vicinity.

Each and every room/apartment has its own living area and its not with any other guests. Our professional hospitality team ensures that you get home-like comforts when you stay in our Serviced Residences. The service quality does not compromise on your privacy at any cost. You are guaranteed a memorable stay at the Olive Service Apartments Kolkata!

Check out our Team

Book confidently knowing that we will give you a Complete Refund if you are not happy with the service quality of Olive Service Apartments Kolkata. No Questions Asked!

What others say about us

Olive Service Apartments Kolkata is a charming little place in the heart of Salt Lake City Kolkata. It is in an area with great cafes and restaurants. It is a very bright and clean and well-designed. The bathroom is incredible, very 5-star! Almost no noise from outside so it was perfect for someone like me who is a light sleeper. I really appreciated the fully stacked Kitchen and selection of guide books. It’s a spacious and beautiful apartment with wonderful staff! Highly recommended.
Ashwini SharmaMumbai
The host of the boutique stay knows the place and the city very well to curate an authentic Kolkata experience.The apartment is lovely, quite spacious and comes with its own kitchen! It is central to many restaurants, bars, and tourist attractions as well as being close to a main road which makes the city easy to navigate. Additionally, Deepak & Team could not have been more welcoming and helpful during our stay. Thank you for making our trip so memorable, we would love to visit again in future.
Amit MishraMoscow
Cannot express what a fabulous place this is, I would give 6 stars if I could! The restoration has been so lovingly done, the attention to detail in each and every Apartment that comes with its own Kitchen. The breakfast is great you can choose between Western or Indian cuisine and both are really good. Overall great apartment!
Vinod KapoorNew Delhi
The Apartment was amazing! We were 4 adults and a baby, it was a very quiet and comfortable stay. The food is delicious and freshly prepared and the atmosphere is homely and welcoming! It was also very clean. The parking space was also good. But the fact that you are in centre of Kolkata is definitely the biggest plus! We all loved it and will come back for sure!
Pankaj SethLondon
Kolkata is one of my favorite cities due to its lively street life and architectural heritage. The Olive Service Apartments Kolkata and their staff are great, the Salt Lake City neighborhood is amazing. The apartment is just as beautiful as the views. Next time I end up in Kolkata, I will certainly be looking to stay here first.
Sameer RajBangalore
My niece, cousin and I came to Calcutta for a weekend visit and did not want to stay in the typical big hotel. This place was recommended to us by various people so we chose to stay here. Very comfortable and conveniently located unit with great amenities including our own Kitchen and awesome staff that are always available on call. We may never stay in a hotel again!
Kunal MehtaAhmedabad

Always book direct with Olive Service Apartments Kolkata. You are then assured to get the lowest possible rate for any our apartments across any other channels.

About the City of Joy Kolkata

The city has also emerged as one of the most important travel & commercial destination and a gateway to the eastern and northeastern Indian states. The IT Parks in Salt Lake City (Bidhannagar) especially Salt Lake City Sector 5 and New Town Rajarhat house some of the top companies of India and the World.

The city of Kolkata, a former capital of British India is considered as the cultural capital of India due to its rich heritage and culture. You can find the history in every nook and corner of this lovely city. This seventh most populous city of India has come to existence in the year of 1690 when East India Company managed to get a trade license from the Nawab of Bengal. After that, this city under the company rule became the capital of India in the year 1793. The renaissance of Bengal and India had started from this very city which makes it culturally and politically rich.

Kolkata has quite a few different tourist places due to which every year millions of travelers come to this city. Park Street is the favourite of Tourists for Shopping & Eating out. Other popular tourist areas include Victoria Memorial, Howrah Bridge, Eden Gardens, Birla Temple, Goddess Kali Temple in Kalighat, Botanical Garden, Belur Math & Dhakineshwar Kali Temple.

** NEW: You can also contact us for arranging Private Tours to Kolkata City of Joy, these Day Trips are organised with transport by private cars and drivers who will double-up as guides.

We can organize private City Tours of Kolkata for all our guests where they can visit all the major tourists attractions & do all their Souvenir Shopping.

We can also organize Day Trips of Kolkata Site seeing in Private Cars for our esteemed guests with professional Drivers who also act as Guides.